If you are having trouble using the system, please try our help guide.

4.1 As part of the earlier consultation on the Development Management Plan, sites that had not previously been considered were suggested to us. It was also suggested that some sites should be reconsidered and that an amendment to the development boundary in the adopted Hastings Local Plan 2004 should be made.

4.2 This section provides information on each of the new sites proposed, as well as the areas proposed for protection as greenspace, and changes to the development boundary.

(1) 4.3 The Council has made no decision over these extra sites and we would like to hear your views before we make any. This is an additional opportunity to influence the sites that could be allocated or protected for different land uses.

4.5 Only the first of these sites, B16 – Land at Breadsell Lane, has been considered through the Strategic Housing Land Availability Assessment (SHLAA). N04 – Land adjacent to Sandrock Park was consulted on in the previous round of consultation, but a slight amendment to the boundary of that site has been suggested. The other four sites have not been consulted upon as part of the Development Management Plan at all, although some have planning history. 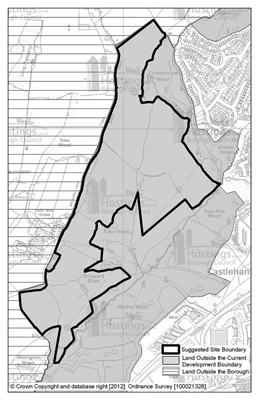 Suggested use: Mixed use

The land at Breadsell Lane, which is outside the current development boundary, was considered as a strategic site for residential development, including employment and other facilities in 2010. A report was presented to Hastings Borough Council’s Cabinet in March 2010 and this outlined the issues involved in bringing this site forward to development. These were generally Natural England’s strong objection even in the light of mitigation studies and other potential constraints including:-

However the owners of some of the land, at the northern end of the site believe a smaller part might be deliverable and meet the requirements of Natural England and avoid excess impact on the SSSI, and that they can overcome the other constraints mentioned above. For reasons sustainability, particularly social connectivity and access to services in Hastings Town Centre, this location for development is still likely to be viewed as strategic, at any size compared to other sites in the Borough, so the Council believe it important to re-consult on the original boundary of this site, with the caveat that the suggestion put forward during the last round of consultation was for a smaller site. 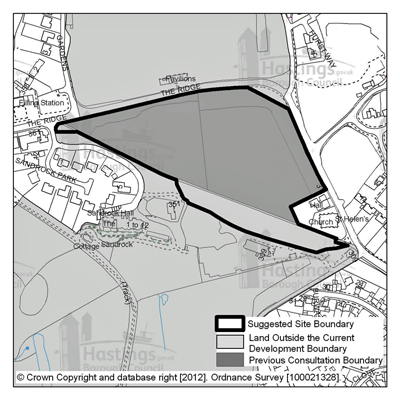 This flat triangular site lies directly to the south of The Ridge. The western part of the site is unused and the eastern part is a playing field which is under used. There is a tree screen along the frontage with The Ridge. The existing boundary trees are the most significant landscape characteristic of the area, and would need to be managed as part of any development. Retention & management of the existing trees and hedges would be the primary means of mitigation. However, a new access would be required at the western end of the site which is likely to take all of the tree screening fronting The Ridge.

The site is currently outside of the built-up area boundary which normally means there is a presumption against residential development. The Development Management Plan offers an opportunity to reappraise the built-up area boundary at this location, however any amendment to the built-up boundary would need to be robustly justified. Although it is on the edge of the urban area, the site is reasonably to close facilities. It has been suggested that the two additional parts of the site to the south be included in the consultation for completeness, however, no decision has been made over the potential inclusion or exclusion of this site in the Development Management Plan. 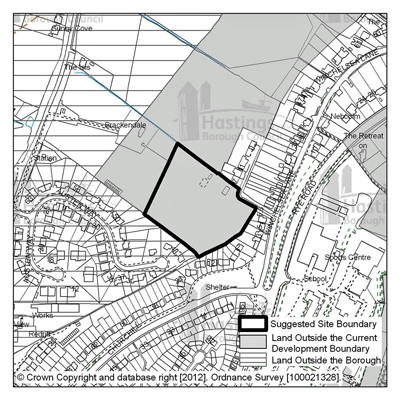 Site address: Land to the north west of Winchelsea Lane

This land was suggested by its owners during the last round of consultation. It is currently outside the development boundary in the north east of the borough, and inside the High Weald Area of Outstanding Natural Beauty. There could be potential to develop this site for residential use with access from Winchelsea Lane, but any proposed scheme would have to appreciate its potential impact on the AONB including views into and out of it. 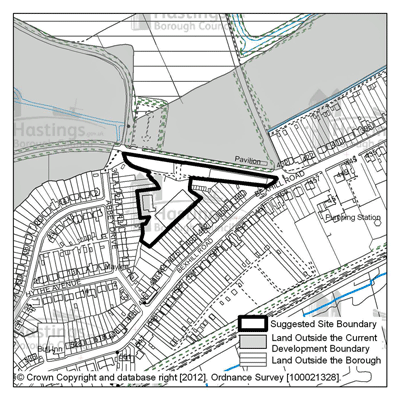 This site was suggested by The Garden Centre Group who lease the site; it is within the current development boundary and in a residential area. It could represent a brownfield site to deliver residential development 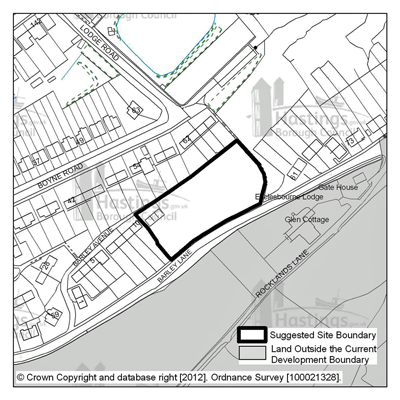 This site was suggested by its owner, it is in the east of the borough adjacent to Barely Lane (which borders the country park). The site is inside the current development boundary and has housing on three sides. It is a steeply sloping site that is part of a locally protected Site of Nature Conservation Interest (SNCI). The site has the potential to be allocated for residential development providing that the reasons for its protection as an SNCI can be protected and that the issues of the site’s steepness can be overcome in development. 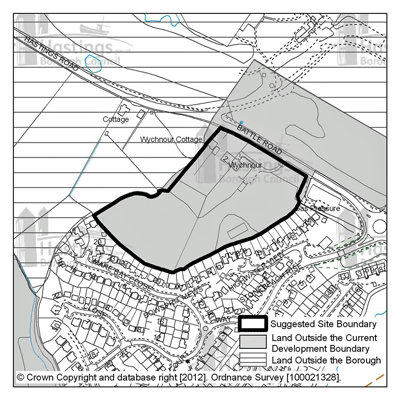 This site, suggested by one of its owners, is to the north west of the borough and is outside the current development boundary. It is adjacent to the High Weald Area of Outstanding Natural Beauty. This area has the potential to be allocated for residential development and if a scheme were to be proposed it would need to find solutions to similar issues as those identified at Breadsell Lane; this would especially be those connected with the relative remoteness of this location when compared to other sites closer to shops and services etc across Hastings Borough.

4.6 During the last round of consultation we asked if there were any parts of the Borough that could be included in the in the ‘Green Infrastructure Network’ that were not already. Some suggestions were made to the Council, and those that we are able to consult on are listed below. Please look at the plans and give us your reaction.

(1373) 4.7 Because the Upper Ore Valley has been an allocated development site in previous plans we would like to present three options for protection of the land in the area. The options are:

4.9 Option B: Protecting the land in the centre and to the south east, leaving only the land along Church Street allocated for development.

(3) 4.10 Option C: Protecting all the woodland in the area of the Upper Ore Valley that does not have current consent for development

Land at the junction of Edinburgh Road and Harley Shute Road

4.11 This is a new site proposed as part of the earlier consultation on the Development Management Plan process. It was not previously allocated for any particular use.

(1) 4.12 The residents local to this site suggested that it ought to be included in the ‘Green Infrastructure Network’ as it represents an area for the community to use for recreation. It is a green space that has the potential to be protected for not only the use for recreation but also the added connectivity for wildlife movements and general biodiversity. 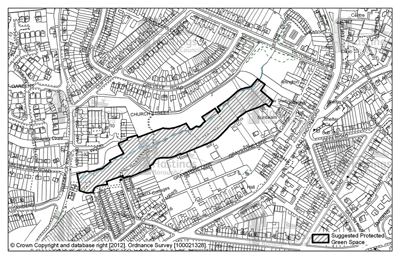 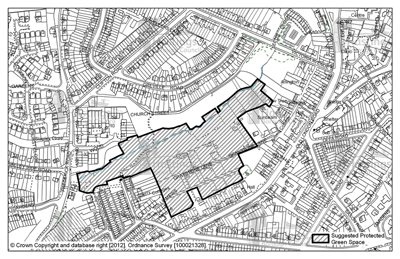 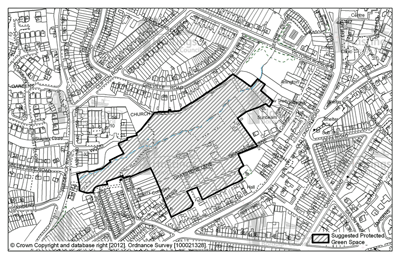 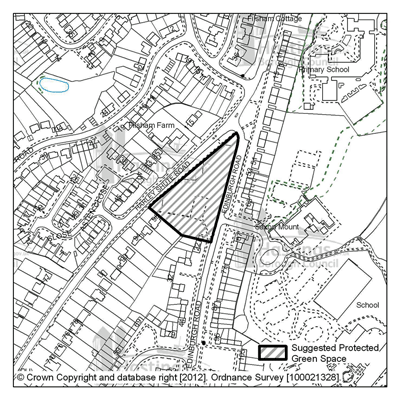 Potential site for the harnessing of wind energy

4.13 Policy SC6 of the Planning Strategy states that the Council will consult on potential sites for renewable energy. A study undertaken by Element Energy Ltd has indicated that there are some possible sites in, and on the outskirts of the town where wind power could be harnessed. Sites in Hastings Country Park were originally suggested but they were within an ecologically protected area (the Hastings Cliffs Special Area of Conservation) so these were ruled out. A site in the west of the town at the edge of the Combe Valley Countryside Park was also identified as one that was at a distance from buildings, power lines and areas of particular environmental protection where it might be possible to site wind turbines.

(1) 4.14 At this stage the Council has not committed to any further investigation on the feasibility of this site as one for wind turbines but would like to gauge opinion on the potential and principle of siting them on the land shown on the next map.

(6) Potential site for the harnessing of wind energy

Figure 23: Location plan for potential site for the harnessing of wind energy 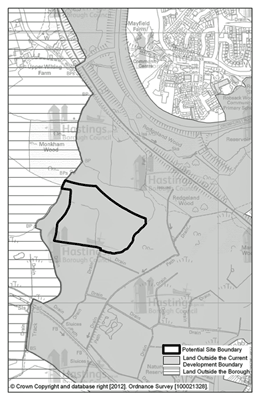 (1) 4.15 It can be useful to define a boundary to the built up area of the town in order control its outward expansion and protect open land on the fringes. The Hastings Local Plan 2004 included a defined built up area boundary. It has been suggested that, if we do continue to adopt a development boundary, an amendment should be made to it as currently proposed in the adopted Hastings Local Plan 2004. This is indicated in the diagram below, relating to land at Glenview Close and Barley Lane.

4.16 One of the owners of the land suggested that this change should be made to reflect the fact that this is in fact the back gardens of the people living in Glenview Close, and these should be included inside the development boundary if it were to be revised and adopted in the new Local Plan

Change to the Development Boundary 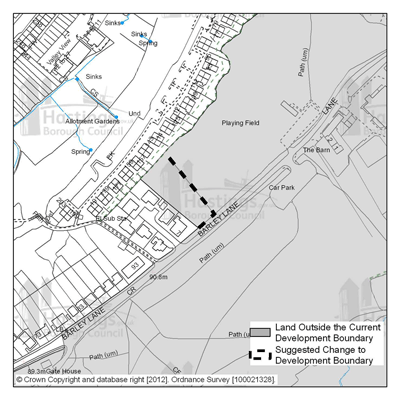 If you are having trouble using the system, please try our help guide.
back to top back to top